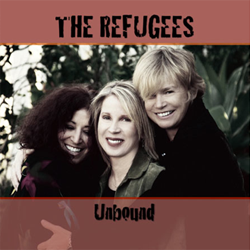 UNBOUND, their debut release on Wabuho Records was released in January of 2009 and garnered many awards. The album received rave reviews and is still a favorite on folk and Americana radio. The talented trio plays guitars, dobro, bass, mandolin, harmonica, accordion, and percussion, and features a mix of innovative new co-writes and fresh arrangements of a selection of their previously recorded radio favorites, including “Save the Best for Last,” and “Fishin’ in the Dark.”