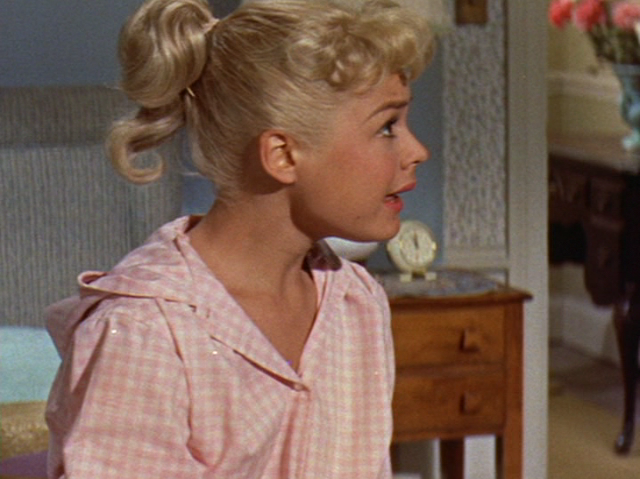 A ponytail IS a hairstyle, NOT an excuse

I would “guestimate” that 4 out of every 7 days of the week for at least part (or whole) of the day my hair ends up (or begins) in a ponytail. For anyone who is not absolutely sure what a ponytail is, Wikipedia states: “A ponytail is a hairstyle in which some, most or all of the hair on the head is pulled away from the face, gathered and secured at the back of the head with a hair tie, clip or similar device, and allowed to hang freely from that point.” For the purposes of this essay I am discussing “all of the hair.”

In the 1950s Sandra Dee, Audrey Hepburn and most notably, Barbie, the ubiquitous and still popular doll, popularized the ponytail for women. Of course the ponytail dates back for women AND men to much earlier centuries. (This is “in praise of the ponytail”, not a history, someone else can write that.) It’s one of the few hairstyles that don’t date a photo to a particular decade as do many of the hairstyles from the 1970s and 1980s (Farrah Fawcett, Cyndi Lauper, etc.), and will probably continue to do so.

I have been utilizing the ponytail for as long as I can remember.  I am one of those people who just don’t look good with short hair, so except for a few disastrous attempts in my 20s, as an adult, my hair has always been long enough for some length of pony. I know I was born with full head of red hair, and almost as if my mother couldn’t wait to show off my swishing flame, the moment I had enough hair for her to wrap a rubber band around, she did. (Much can be said on the significant improvement of the “hair-tie,” a rubber band covered in fabric, over the basic rubber band, which, when un-releasing a ponytail would frequently be painfully accompanied by a handful of hair.)

In fact, a few of my most memorable childhood incidents revolve around my ponytails. For my “nursery school “(what is now called pre-school) graduation, a group of the mothers had to get together for a meeting to figure out how their daughters with ponytails would wear the graduation cap (made of paper). The problem was resolved by cutting a hole in the cap allowing the ponytail to poke through. In 2nd grade the rubber band holding my ponytail broke, and my tears landed me in the nurse’s office, who turned out to be an expert in ponytail first aid. Then there was the time that my mother’s hairdresser, Charles (of Charles’ Salon in Clifton N.J.), lopped WAY TOO MUCH of my hair off when I had asked for a trim, and I kept my hair in a ponytail every day for 2 years until it grew back. Of course this was accompanied again by a significant amount of tears and rage. Charles joked about this for YEARS, as if I were to blame! When looking through family photo books it’s difficult to find pictures of me as a child without a ponytail, and when one is found, there is a particularly dour expression on my face. These are mostly during the 1960s (the “pixie’ haircut, the too-long bangs, etc.).

There are only two downsides that I have encountered in wearing your hair in a ponytail and these are 1.) Most hair does not respond well to the ponytail being taken out (large bump, or rise, in the back of the head, exaggerated if your ponytail was made when your hair was wet) and 2.) A too-tight or worn-for-too-long ponytail can lead to a massive headache. These downsides have easily enough remedies that most users of the ponytail have figured out. (Not putting your hair in a ponytail when wet, and removing the band after 24 hours are just 2 of the many solutions.)

A few weeks ago I went to see Lenny, my Los Angeles “colorist.” (Yes it’s typical in Los Angeles to have more than one person who works on your hair!) I don’t see Lenny very often these days because I split my time between Los Angeles and Vancouver (the one in Canada) and by the time I do see him my gray roots have spread halfway across my part line which is why I always show up with my hair in a ponytail. What was different this time was Lenny complimented my “low” ponytail. You can gather your hair up in a high, (towards the top of your head), medium (back of your head), or low position (close to your neck) ponytail. My ponytail was actually in the medium position that day though to Lenny’s eyes it was low. Who am I to argue with a hairdresser?

Now this is the same Lenny who once said, “a pony tail is not a hair style, it’s an excuse,” in response to my comment that the ponytail is timeless. When I reminded him of this quote he seemed slightly embarrassed (or so I imagined). Did I feel vindicated? Oh yeah, big time, for I have always known the ponytail rocks, and will rock, and if the day comes and my vanity subsides, I will then let my hair turn white, wrap it into a bright red “scrunchie” (yet another replacement of the rubber band, essentially a hair tie with billowing fabric.) and I will let that white freak flag fly.