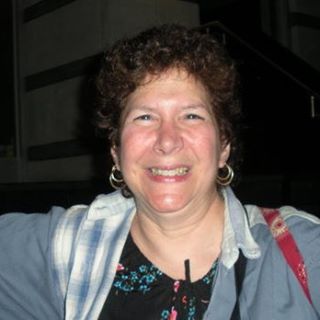 “I’ll say goodbye to cousin Phyllis
Just tell the gardener he should bill us”
-­ from “The End of The World” by Deborah Holland, The Book Of Survival, Gadfly Records 1999

I had a choice of seeing Phyllis alive one last time or attending her memorial. I chose to see her alive and I’m glad I made that decision, though I am sad not to be here today.

Phyllis did not have an easy life.

She was born to 2 tall, gangly, funny-­‐looking, chain-­‐smoking, miserable parents whose “inside voice” was a shrill. They were the least prosperous of all the relatives and her sweet, mild, father was constantly harped at for being a loser. She never married, was single almost all of her life, didn’t have kids, never had a fulfilling career, and then, cursed with the Braca’s gene, had to deal with breast cancer and then ovarian cancer, which led to her early death.

In spite of this, she was, well, jolly. She was just the most exuberant person I’ve ever known. No one laughed as loudly and boisterously as Phyllis (which seemed to get louder and louder as she aged. So much so that a few years ago when Simon was 9 or 10, he asked me if there was something wrong with cousin Phyllis). She didn’t dwell on the negative when she was around you. She would just have fun. She looked forward to the next concert or festival or trip to anywhere.

We all know how much music meant to her. She was a super-­‐fan of the bands she loved and if a band was lucky enough to have her as a fan, they had a life-­‐long supporter. My band, The Refugees, was lucky enough to have been on the receiving end of that support. She would discover, and then champion bands that were never household names. I knew she was at the end of her days when she no longer wanted to even listen to music.

She always had a core of great women friends, and spoke of things in her life as
“we.” I would have to ask who is “we” and she’d rattle off a few names. She met many of her closest friends in the mosh pits of bars where Black 47 was playing.

Phyllis was 4 years older than me and was the closest thing I had to a sister. From the age of 5 on, I would spend the weekend at her apartment a few times a year. For some reason we had some really strange games we played which years later we laughed about. One of the games was I was a piece of hair that she would throw in the garbage. Another was called “she’s coming”. We would have been put to bed and my aunt and uncle would be sitting in the living room watching TV. The object of the game was to throw a pillow towards them and then have to retrieve the pillow without being detected. When the pillow was retrieved we would fall into gales of giggling. In my memory we only got caught once. I learned to read one weekend from one of her books. I actually know the first words I ever read. “Grr, grrr, said the tiger.” One day she said I couldn’t come in the bathroom with her anymore. “Why?” I asked. “Do you know what a period is?” she asked. “Yes,” I said. “It’s the little dot at the end of a sentence.”

When I was 13or 14, Phyllis started taking me to concerts with her best friend Doris. This was the beginning of my musical education. I wish I could remember all of the concerts she took me to over the next few years. I do remember Crosby, Stills and Nash and Linda Ronstadt, barefoot, at the Fillmore, Tom Paxton, Paul Seibel, Tim Hardin, Richie Havens, Janis Joplin, The Weavers, Pete Seeger and on and on. If Doris is there you can ask her. She kept copious notes of every song performed.

Phyllis learned to drive in her 3Os when she was living in NJ and I can definitely say she was the worst driver I’ve ever seen. With a death grip on the steering wheel and face inches from the windshield, I was happy when she moved back to NYC and could go back to using public transportation. She was also not known for her meticulous housekeeping.

Phyllis was the quintessential New Yorker. She lived and breathed the city and it’s where she belonged. She was a kind and loving person. She was quick to befriend someone. She was more of an Aunt than a 1st cousin once-­‐removed to my niece and nephew; generous, doting, and proud.

I could go on and on with memories: the 1972 Philadelphia Folk Festival when 5 of us slept in my parents’ Chevy Impala (one in the trunk) because of pouring rain, exploding feather pillow fights vacuumed up seconds before parents returned, more concerts, overnight visits to a series of NY apartments, traveling with me on a solo tour in the late 1990s, etc., etc. etc.

Everyone here has their own memories of Phyllis. It just sucks that she’s gone.
I love you cuz. You will be missed.

My cousin, Phyllis Kronhaus, died on January 22, 2015 from complications of cancer. She was 64 years old.