Let’s start with a list of all the artists I saw during the day:  Donovan Woods (2x), Mariel Buckley, Guy Davis, Gordon Grdina’s Haram, Little Miss Higgins, Dawn Pemberton, Petunia and the Vipers, Small Glories, and Leonard Sumner (I think I may be leaving a few out). These were all in workshops (themed mini concerts with a few artists).

I just checked my Pacer app (counts steps), and I clocked 9,539 steps, so a LOT of moving around between stages under a really hot sun (almost 30 degrees).

I’m an avid Donovan Woods fan, and I’ve heard Dawn Pemberton before (Vancouver-based blues and gospel singer), but the rest were all new to me.

The quality of artists booked this year is really high, so there were no slouches in this group, but the one that really hit my sweet spot was The Small Glories. Winnipeg-based Cara Luft (founding member of the Wailin’ Jennys) on guitar and 4-string banjo, and J.D. Edwards (of the J.D. Edwards band) on guitar have the “it” factor. They’re infectious performers and have a vocal blend and sound that goes back to the roots of Hillbilly music, particularly because of J.D.’s “nasal, high-lonesome sound.” Think the Carter Family or Gid Tanner and His Skillet Lickers, but with a modern twist. (There’s a particular singer from the 1920s that J.D. reminds me of, but I can’t remember his name, and Google was no help). 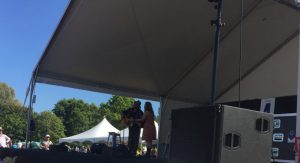 After a full day of music and heat, I’m beat. I’m dirty, sweaty, and my back is killing me. I think about going home to lie down and take a break, but I’m afraid if I do I’ll never make it back. I do get my veggie burger (kudos to The Kaboom Box) and a Big Rock Brewery beer, which helps a little. I sit on a bench for a bit and people watch. There’s lots of great, new-looking clothes, and I hope I have some time tomorrow to shop. 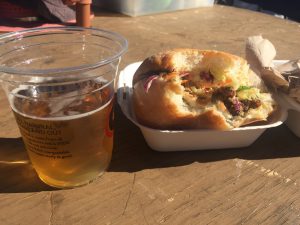 Ok. On to the evening.

The main stage starts with Kacy and Clayton, cousins from Saskatchewan. Kacy Anderson is compared to Joni in their bio, but she reminded me more of a young Emmy Lou. Coincidentally, when it was  Clayton Linthicum’s turn to sing, I heard traces of Gram Parsons, as well as guitar influences from Albert lee and John Jorgensen (Emmy Lou’s early guitarists). Backed by a rhythm section, the music was a mix of country, English folk, and more, sometimes reminding me of Fairport Convention and sometimes of the Cowboy Junkies.

Next up was DakhaBrakha, a huge hit with the crowd, but in between, I ran over (ok, walked quickly) to Stage 3 to catch a song from Cuban-born, Canadian treasure Alex Cuba. Winner of Latin Grammys, Junos and more, the charismatic Cuba is everything I thought he would be, deserving of all of his accolades. 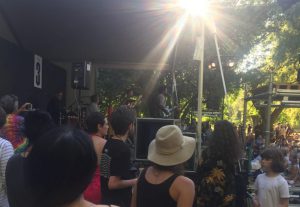 That is Alex Cuba up there! Photo by Deborah Holland.

Back to DakhaBrakha.  There’s no way I have the time needed to describe the Ukrainian band’s costumes, music and energy, so I’m sending you to YouTube. Do yourself a favor and watch this:

Something was different by the time Rodney Crowell was one song into his set. I looked around and noticed people had stopped talking. It’s was as if a consummate singer-songwriter was up there with a brilliant two-piece backing band, and one HAD to take notice. That’s because that was exactly what we were witnessing. Crowell talks little between songs (I always prefer a little more) but every song was a little gem. Applause was heard after every solo (first time I heard that happening as well). I know nothing about guitarist Joe Robinson or mandolin/violin player Eamon McLoughlin (who has a beautiful voice of his own), but I predict we will be hearing a lot more of them. 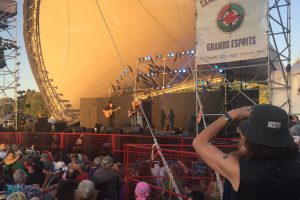 Rodney Crowell on the main stage. Photo by Deborah Holland.

Closing band The Dead South, from Saskatchewan, had the most “buzz,” and they may be the best new band on the scene, worthy of the buzz, but sadly I couldn’t stay. Maybe if I were 10-20 years younger, I could have, but I had to take my tired body home. I was wishing I had taken the bus instead of riding my bike but I made it. I’m actually happy there’s only one more day. Did I mention I leave Monday morning for a two-week trip to the Yukon? I didn’t think so.