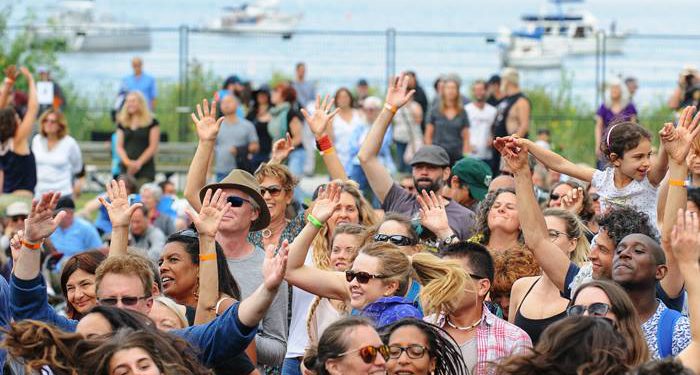 Here are a few truisms about folk festivals (and music festivals in general, but particularly folk festivals). You’re not going to be able to hear all the music. If you try, you won’t have any fun, and you’ll never see any full sets. Even with the most precise, pre-planned schedule, you won’t ever hear everyone you planned to see.

I planned on arriving at 12:15 to see Donovan Woods, a third time, but the only time he was not sharing the stage with other acts, and the only time with a full band (the same musicians who played on his newest record, Both Ways). This concert was one of the shows I was most looking forward to. A “family situation” prevented me from getting there on time though, so sadly, even literally running to the stage, I only caught the last half of the last song, “Next Year,” and even that was a thrill. In my humble opinion, Donovan Woods is one of the best singer-songwriters out there today. 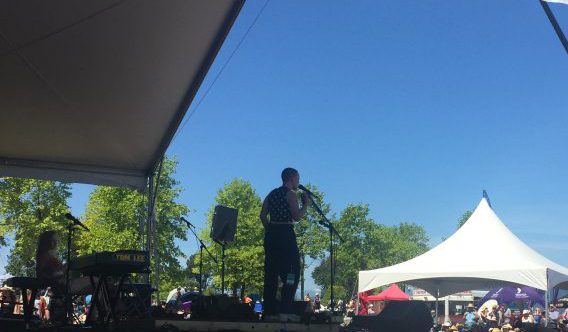 Wallis Bird at the VFMF. Photo by Deborah Holland.

The rest of the early afternoon (again burning hot sun beating down, but yes, SO much better than if it were raining), was spent trying to catch as many unknowns (to me) as I could. It turned out to be an all-female, all really good early afternoon. I caught partial sets of Steph Cameron (country by way of punk), Virginia’s Dori Freeman (trad. folk roots) and Irish whirlwind Wallis Bird (high energy, loop-based, Ani DiFranco on steroids).

I then hit the market to check out clothes and jewellery because I knew it was my only chance to do so. Maybe it was the heat, maybe it was because I was exhausted, maybe it was the “family situation” (life), but I found it completely overwhelming and wandered through in a daze. I realized if I planned to make it through the evening performances I needed a break, so I rode home and spent two hours quasi-relaxing. I got back in time to catch two balladeers from the same part of the world.  U.K.-born Canadian Martin Kerr (on guitar) and Ireland’s Mick Flannery (guitar and piano), both with lovely voices, trading songs and stories.

As it closed in on 6 p.m., the start of the main stage performances, I grabbed a delicious but very messy sandwich from El Corito, a Venezuelan gluten-free, vegan food truck, and another lager from Red Rock Brewery. During dinner, I got to hear more of the amazing Alex Cuba, who was playing at the adjacent stage. On to the show. 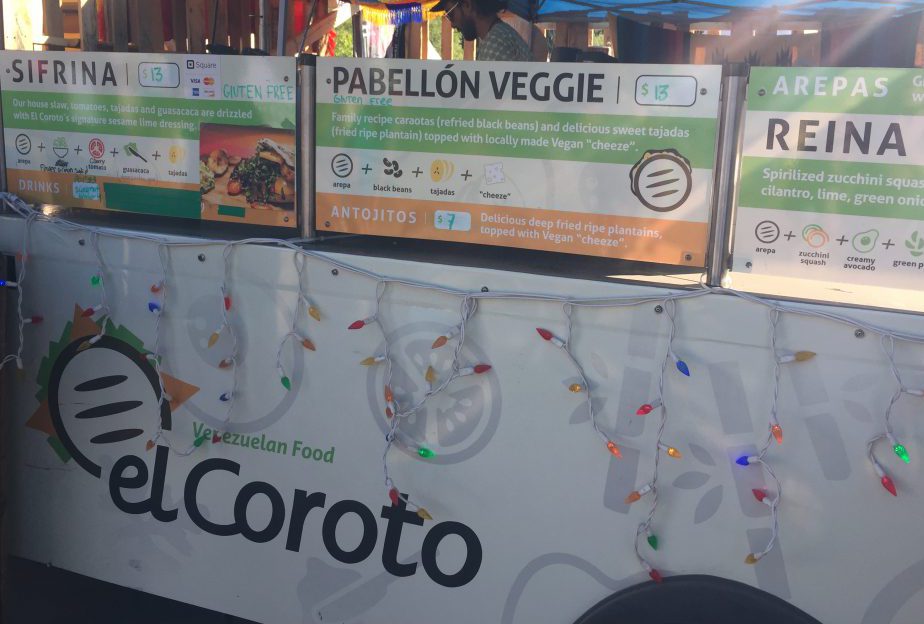 Jayme Stone’s Folklife started off. I caught them about four years ago and really liked them, but they’re even better now. Jayme takes Alan Lomax recordings from the 1920s-1940s and puts a unique modern take on them. Again, standing in front of a single microphone, the music moved from the mountains of North Carolina to the Caribbean Islands, from four-part a cappella shake-note singing to hoe-down dance music. Stone is a Juno-winning banjoist who, like Bela Fleck, takes the banjo into exciting new places. It’s a wonderful quartet but the secret weapon is vocalist Moira Smiley. I’ve been following Moira since hearing her band VOCO about 10 years ago at a regional Folk Alliance concert, and she too continues to get better and better. She was the stand-out vocalist of this years’ festival. Her range and technique and tone are breathtaking, but none of that ever gets in the way of the soulful delivery of the song. It’s all about the song when she sings. If it’s jazzy, she can scat and improvise like Ella and Sarah, and if it’s folk, she’s Aunt Molly Jackson, but whatever the genre, she’s Moira Smiley.

Next up was Wazimbo and Banda Kakana from Mozambique, playing a style of music primarily sung in Portuguese called marrabenta. Half the audience was up and dancing for the entire set. I have to admit I have never been a huge fan of African music. Call it a personality defect, but even King Sunny Ade in concert failed to keep my interest. I love it for a few songs, and then everything starts to sound the same. I apologize to all lovers of African music. Graceland is one of my Top 10 favorite albums, but to real aficionados this hardly counts. I do know the crowd loved them, so I was definitely in the minority. 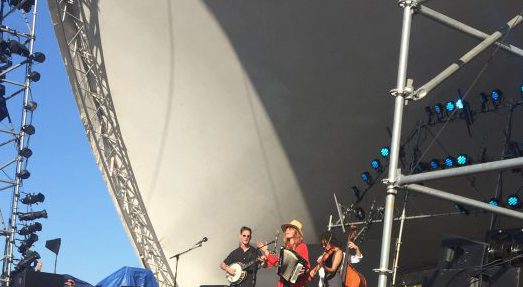 The dance party continued with the much anticipated Ranky Tanky from South Carolina, performing a style of music called Gullah. The Gullah people are African Americans originally brought over as slaves from West Africa who live in regions of Georgia, South Carolina and the Sea Islands. Gullah is folk, R&B, gospel, spirituals and jazz. Trumpet player and spokesman Charlton Singleton told the audience that “Michael Row the Boat Ashore” is a Gullah song, as is “Kumbaya” and “You Got to Move” (made famous by the Rolling Stones). Blistering trumpet and guitar solos, a super-tight rhythm section, and a dynamic lead singer in Quiana Parler were all part of the Ranky Tanky magic

Before the last band of the night and of the whole festival, acoustic blues, one-man dynamo Guy Davis held forth while the stage crew worked out some sound issues. With nothing but a guitar and harmonica, he managed to keep everyone dancing (including me).

It’s true that sometimes the best is saved for last, and Ry Cooder featuring The Hamiltones was exactly that. This is how it’s done people. Top notch playing, top notch writing, top notch singing, genre-less, timeless, masterful, funky as hell, smart as hell, this band knocked it out the festival ballpark. Ry Cooder has been making this type of music since the 1970s, and I don’t care how old he is, very few can even get close to his artistry.

I left before the last song, and on the program it said Dawn Pemberton was to lead the audience in a sing-along of Leadbelly’s “Goodnight Irene.” I can only assume this happened and if I was already packed for my trip to the Yukon I would have stayed until the very end.

And so, the 41st Annual Vancouver Folk Music Festival draws to an end. It’s a two-advil evening for me and not much sleep. Until next year… 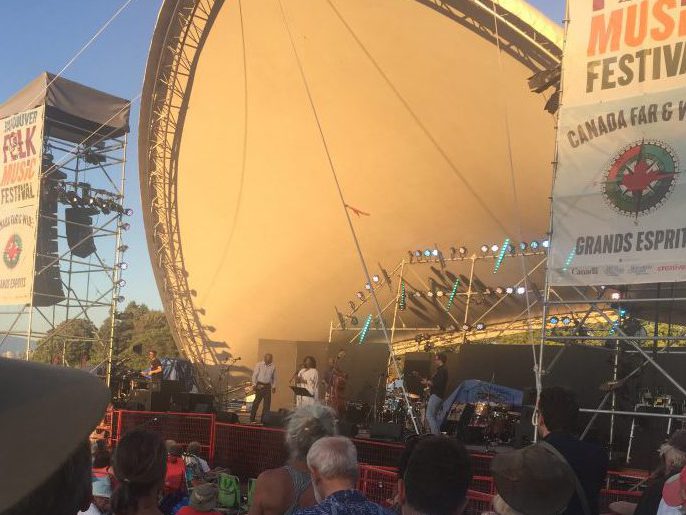