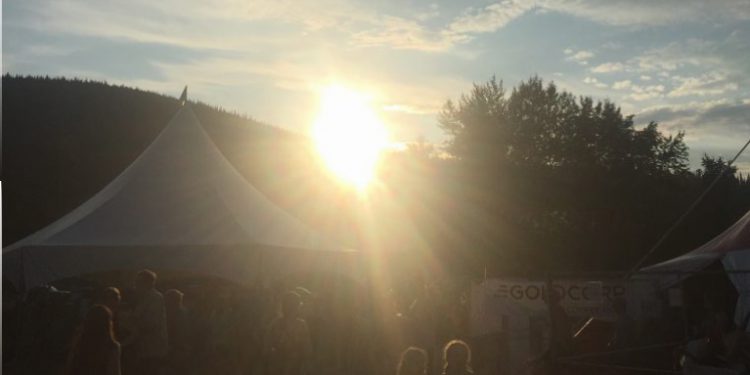 “It’s like a party.” – Annat Kennet, my traveling companion

People who live in almost total darkness for three quarters of the year don’t need much of a reason to have a good time in the middle of the summer – when it doesn’t get dark until around 3:00 a.m., but the Dawson City Music Festival (in its 30th year this year) is the best reason of all. Though tiny in comparison to most music festivals – around 1,200 attendees at its max I was told, with only a few food stands, one clothing and one coffee stand, and a beer garden with only canned and bottled beers – the people attending don’t seem to care.  They had as good a time, and showed maybe even more appreciation, as any Coachella (or fill in the blank, any large music festival) audience.

My road trip to the Yukon just happened to coincide with the last day of the festival, so of course, I had to go. I admit that at first, I was shocked at just how small it was. The DCMF’s reputation is stellar, and in my imagination, it was larger. Of course, I had just come from the Vancouver Folk Music Festival, which is about 10 times the size with about 10 times the attendance. 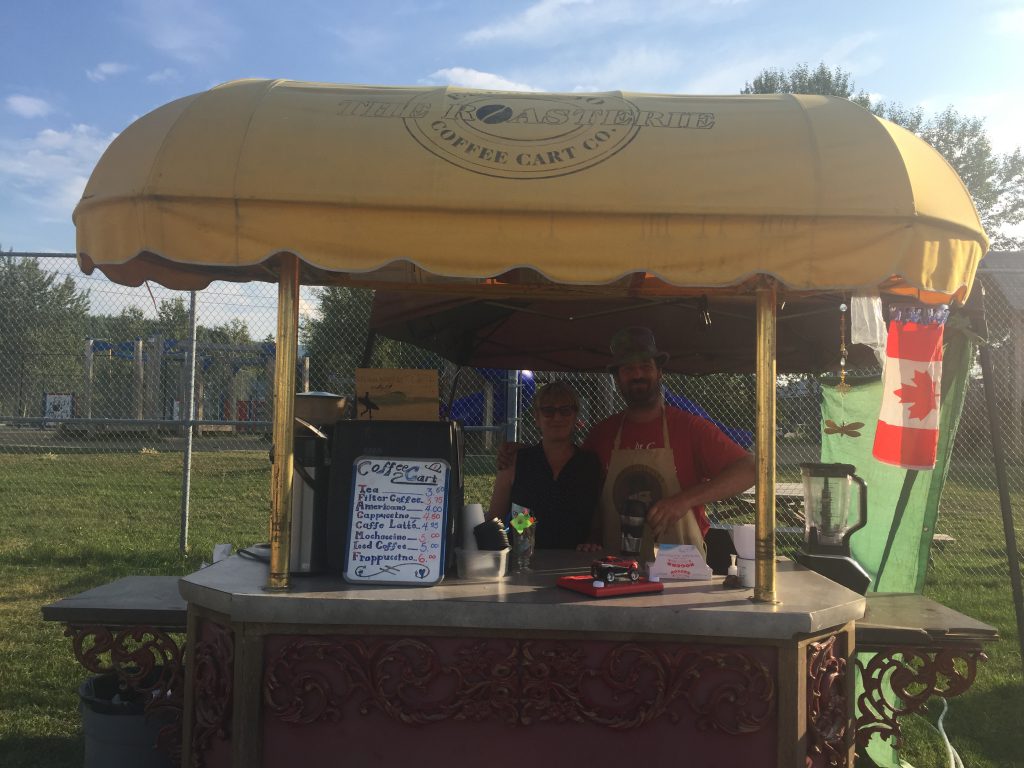 The best coffee at the festival. Photo by Deborah Holland.

There were four acts on the bill. I missed the Ross River, YT opener Dena Zagi (my apologies!) but was there for the others.  I’m a fan of and have heard Old Man Luedecke, aka Chris Luedecke, perform many times, but it was wonderful to see him in a setting where the audience was all “his.” Chris has some roots in Dawson City, and even though he’s a solo performer, he seemed to generate the most fun (certainly the most dancing of the night). With his banjo and stomp box, he created an all-ages festival hoedown party. I sensed he was doing more of an upbeat set than he normally does, and this was probably a wise decision, since the setting is much less a “listening” one and way more of an audience participation one. It seemed as though almost everyone in the audience knew the words to, and sang along with, his closing song, “The Early Days,” a fabulous song about the short time of baby-dom from the equally wonderful record Domestic Eccentric.

The third act was Skye Wallace, an artist who is as comfortable in the acoustic folk world as the post-punk, indie-rock world. With a four-piece full-on rock band, Skye was 180 degrees from Old Man Luedecke, but the audience was just as happy, and she even got called back on for an encore. Ironically, she is one of the artists I missed last week at the Vancouver Folk Music Festival, but I suspect she showcased her folkier side, as she performed as a solo artist there. Skye was the DCMF’s most recent Artist-in-Residence in January (take note songwriters!) and had songs directly relating to that experience. 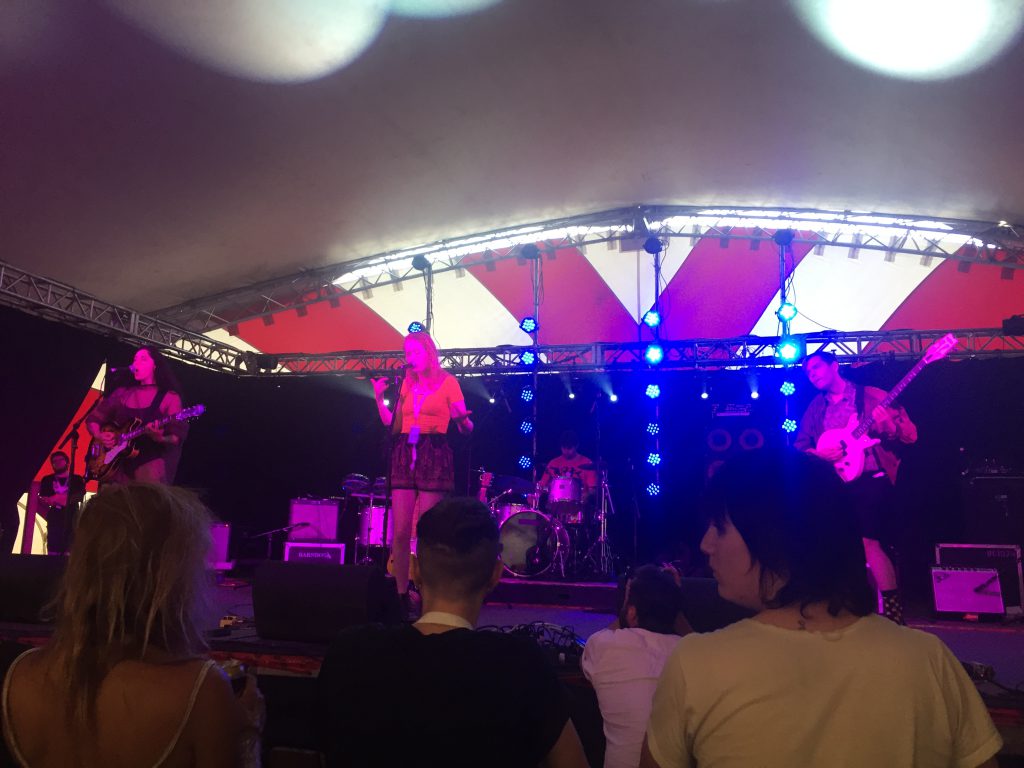 The closing band, and headliner, Elliot Brood, brought the house down (and up). This is another example of a Canadian band I feel like I should have already been familiar with but wasn’t. The audience knew the festival was coming to an end, and the roots power trio (emphasis on “power!”) from Toronto – who reminded me of a cross between Mumford and Sons and The Tragically Hip, with a little AC/DC thrown in – turned the floor into a gentler version of a mosh pit. The band consists of Mark Sasso on lead vocals, guitar, banjo, ukulele, harmonica, and kazoo; Casey Laforet on guitar, lead vocals, backing vocals, bass pedals, keys, and ukulele; and Stephen Pitkin on percussion, sampler, and backing vocals. Wikipedia says:  “The band’s style has been categorized as ‘death country,’ ‘frontier rock,’ or ‘revival music.’” In my book, the songs were great, I loved Mark’s voice, they create a sound much bigger than three people should, and they have just the right amount of quirkiness.

I couldn’t make it to the very end of their set and for the finale of the festival. I had driven from Whitehorse that day.  But I happily walked back to the hotel at 11:30 p.m. in (almost) broad daylight. There’s so much more to be said about Dawson City, but this is a music blog, not a travel one after all. 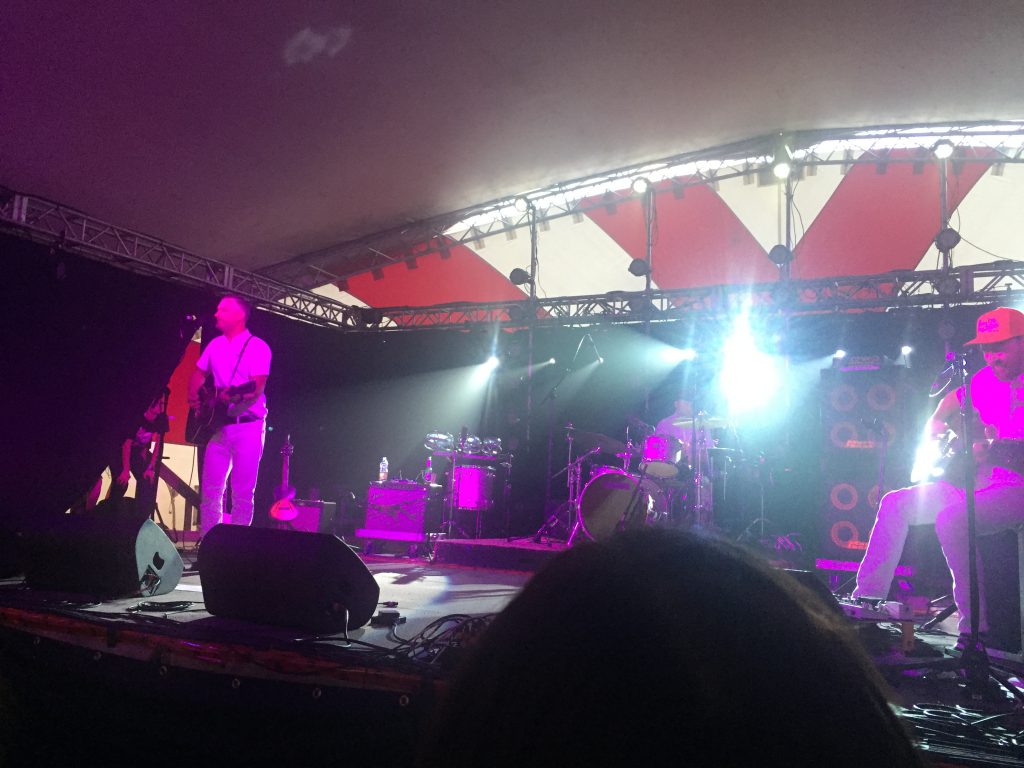