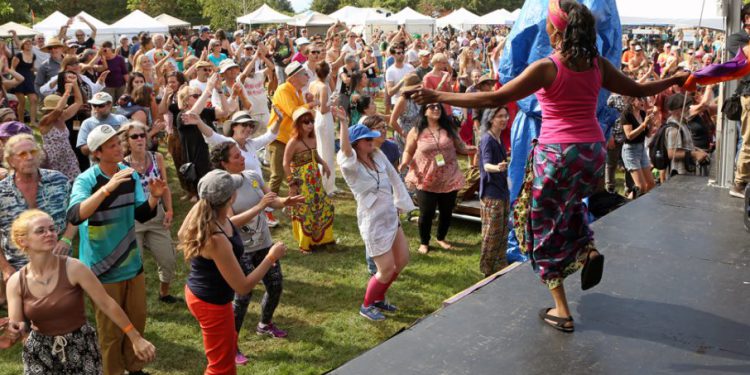 This was supposed to be five acts, but even getting it down to seven was difficult. However, since I started with 18, I feel pretty good about seven.

First of all, kudos to artistic director Debbi Lynn Salmonsen for bringing together literally something for everyone. There’s plenty of great world music, lots of traditional music, many singer-songwriters, some cutting edge music, a smattering of hip-hop acts singing in multiple languages, and of course, bands that are great to dance to. The one thing not on the list is a big international star. No Josh Ritter, Steve Earle, Ry Cooder, Lucinda Williams etc., and that’s OK.

Because I’ve only lived in Canada for nine years, three of the acts I’m excited about seeing are three acts that most Canadian festival goers (and fans of great music) have seen many times. The Dardenelles, Rosie and the Riveters, and the Sam Roberts Band need no introduction here, so I’ll move on.

I’ve been following Larkin Poe (sisters Rebecca and Megan Lovell from Georgia) for about a year and have been waiting for them to come to Vancouver. Their music is Southern boogie, blues, roots, dirty, and rockin.’ They’re great musicians (wait til people hear the lap steel), singers, and writers. These sisters are on fire! Elvis Costello has been championing them for years, and it’s no wonder why.

Next on my list is David Hidalgo (of Los Lobos) and Steve Dawson (Canadian roots musician). I have no idea what they’ll be doing (nothing on the website offers a clue), and they’re only playing once at the festival. I’d probably go see David Hidalgo sing the phone book, so for sure I’ll be there for this one.

I’ve never heard of the last two acts on my list, but I’m really intrigued by both. The instrumental music of Aerialists, is described as “prog-trad,” which seems fitting, as they combine traditional instruments with a “jazz-schooled” rhythm section. Like the band Darlingside, who wowed last year’s VFF audience, the band was formed at Berklee College of Music in Boston. The three core players are harpist Màiri Chaimbeul, guitarist and writer Adam Iredale-Gray (founding member of Fish and Bird) and fiddler Elise Boeur. After listening to some of their music, I read that they’ve already received Juno and Canadian Folk Music Award nominations, so I’m pretty sure my intuition is spot on for this band.

The seventh act is Brooklyn-based The Rad Trads. I’m predicating this rhythm section and horns band will be one of the buzz-bands of the festival because their sound is completely infectious. It’s New Orleans meets Stax meets Bruce Springsteen meets Muddy Waters all wrapped up with a sense of humor. They are tight, funky, and fun.

Of course, these are just seven. I could’ve picked a dozen more to write about that I am equally as excited to see (Ramblin’ Jack Elliot, Amos Garrett, Basia Bulat, etc.), and I know I WILL be seeing more. Very soon.