Deborah Holland rose to prominence with iconic trio Animal Logic, spawning decades of success as a solo performer, member of folk supergroup The Refugees, film scorer, and educator, all leading up to the release of her 2020 EP Fine, Thank You! – a wide-ranging fusion of pop, folk, jazz, and more. 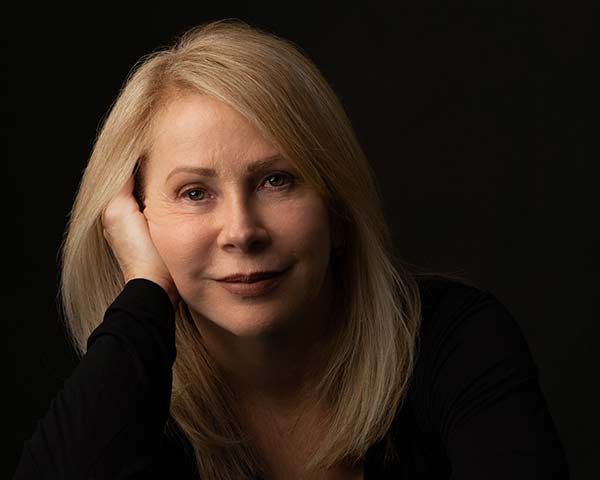 Well before being plucked from obscurity to front innovative and iconic trio Animal Logic in the late ‘80s through her decades of success since, Deborah Holland has been remarkably prolific with her musical output. More impressive, though, is that regardless of genre or era, of setting or surroundings, that output has been consistently inspired and irrefutably captivating – as is the case with her latest six-song collection, Fine, Thank You!

In large part, that’s because she’s simply compelled to create.

“When I try to stop for any length of time, an emotional ocean builds up in me and eventually, I just have to let it out,” muses the accomplished singer, songwriter, educator, and multi-instrumentalist. “It’s a form of therapy for me – something I’d do regardless of whether it brought me any success; I just kind of have to.”

Fortunately, there’s been an eager audience for the fruits of her work since she and her Animal Logic bandmates – Police drummer Stewart Copeland and legendary jazz bassist Stanley Clarke – dropped their self-titled debut in 1989 and followed it up with Animal Logic II in 1991. She’s also shared five diverse solo albums, recorded with Wendy Waldman and Cidny Bullens as folk supergroup The Refugees – including their EP How Far It Goes in early 2019 – and scored a handful of feature films, including the cult classic Circuitry Man.

What’s more, she has performed on both The Tonight Show and Late Night as well as MTV, VH1, and MuchMusic. Meanwhile, songs from her vast catalogue have been featured in acclaimed series like Keeping Up with the Kardashians, CSI, My Name Is Earl, and dozens of others.

All of this subsequently spawned an impressive stint as an educator, first with a decade-plus on faculty at California State University and now teaching and mentoring students at Langara College in her newfound home of Vancouver, Canada.

The awards, the accolades, the enviable achievements – all have led up to the release of Fine, Thank You! – a welcome and wide-ranging fusion of pop, Americana, folk, jazz, and more that borrows from her past but is firmly anchored in the present.

“I’ve developed my own style over the years that defines a lot of my work,” Holland begins, “but I’ve always listened to and been inspired by new, sometimes really boundary-pushing sounds. This record showcases a lot of those different influences and experiences all coming together.”

As such, the EP sways effortlessly from foot-stomping, Celtic-tinged folk to soothing soft rock to buoyant modern pop, keeping Holland’s virtuosic vocals and searing wit ever at the forefront. And despite the myriad of ingredients in her now-signature sonic cocktail, the execution is never muddy, instead boasting a mastery forged from countless hours in the studio and on stage with the music industry’s best.

Co-produced and engineered by Winston Hauschild on Bowen Island near her newfound home of Vancouver, Canada, Fine, Thank You! continues that trend, with Holland accompanied by another stellar cast of collaborators like JUNO-winning backup vocalist Shari Ulrich, Patterson Barrett on pedal steel, and Copeland himself behind the kit on four cuts.

“Since her ‘escape’ from Animal Logic back in the day, Deborah has grown and grown as an artist as her songs go even deeper into a life lived,” Copeland says, adding about the EP’s title track: “’Fine, Thank You!’ is indeed great; very distinctive the way the vocals weave around a really poignant lyric.”

Ulrich also offers some deserved praise, saying: “Deborah is one of those rare gems who has it all – exceptional songwriting with bold, insightful, and honest lyrics and a voice with a pure, gorgeous tone to deliver them. She’s the real deal.”

Lyrically, Holland is as earnest and engaging as ever, equally at home with the deeply sentimental and sharply sarcastic. “I’m afraid it all comes from my lived experiences,” she jokes about her chosen subjects. “It really comes down to dealing with big life changes, and generally just trying to be happier, trying to be more optimistic, and trying to maintain a sense of humour while answering life’s big questions.”

From the outside looking in, it seems she’s figured out a fair share of those answers. Deborah Holland has built an impressive career sharing boundary-pushing, genre-bending sounds, and plans to continue that journey with the release of Fine, Thank You!

“There’s really nothing else I’d rather be doing – or really, nothing else I could be doing,” she asserts. “This is my life’s work, and I’m not done with the living or the working just yet…”